In 1780, a group of African men assembled in Newport to organize and charter America’s first mutual aid society for African and now African Americans known as the Free African Union Society.  The Society’s lofty mission included providing funds for indigent families, a burial society (Palls and Biers) to ensure proper burials, setting moral and ethical standards for public conduct within the larger community and most importantly, raising consciousness and funds within the African community to someday return to their native Africa. Meeting minutes of the Society that still exist today describe in detail the efforts to promote the betterment of fellow Africans, slave and free.

In a January 24, 1787 letter from African Union Society President Anthony Taylor to Abolitionist William Thornton, Taylor proclaims the interest of the Society for organizing a return and settlement back to Africa:

Our Earnest desire of returning to Africa and settling there has induced us further to trouble you with these lines, in order to convey to your mind a more particular and full idea of our proposal…We want to know by what right or tenor we shall possess said Lands, when we settle upon them, for we should think it not safe, and unwise for us to go and settle on Lands in Africa unless the right and fee of the Land is first firmly and in proper form, made over to us, and to our Heirs or Children.

It is remarkable to note that the American Colonization Society would not be formally charted until 1816 and the colony of Liberia established six years later, but the African men of Newport nearly thirty years before had already initiated and organized a movement to return to Africa.  Anthony Taylor would die in 1799 and be buried in God’s Little Acre, but on January 4th, 1826 setting sail on the brig Vine, twenty four members of the Society from Newport would arrive in Liberia on February 6th. Ironically, much of the party succumb to fever and died within a year. Triumphantly, they had not died in a land where men were held as slaves. They died free in their own land.

Continuing its mission in Newport, the society would establish one of the nation’s earliest free African schools that is organized, supervised and taught by fellow Africans. A March 25, 1808 notice in the Newport Mercury Newspaper advertises the availability of a school for all African persons in Newport, at no charge to students. 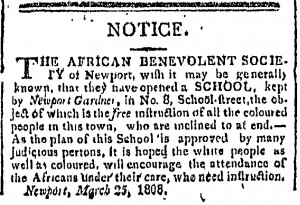 “The African Benevolent Society of Newport, with it be generally known, that they have open a SCHOOL, kept by Newport Gardner, in No. 8 School Street, the object of which is the FREE instruction of all of the coloured  people in the town, who are inclined to that end.  As the plan of this School is approved by many judicious persons, it is hoped the white people as well as coloured, will encourage the attendance of the Africans under their care, who need instruction.”

African women were able to become members of the African Union Society, but were restricted from having voting rights. Not to be outdone, Newport’s African women, led by Obour Tanner and Sarah Lyna would establish the African Female Benevolent Society in 1809. The women’s society led the efforts to raise funds in support of African widows and their children along with supporting the African Free School.

Click here for a list of children of color attending the African Free School from October 10 to March 23, 1809. 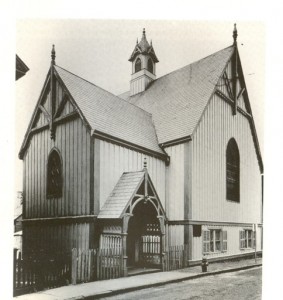 In 1824, the Free African Union Society completed its evolution and became the Union Colored Congregational Church. The church was one of the first churches with a solely black administration, operational charter, and congregation. Located on Division Street the congregation became the center of 18th and 19th century African American religious, civic, political and cultural life in Newport. Early founders and leaders of the Free African Union Society and Union Church included: